YEMEN: EFFECTIVE HUMANITARIAN AID DEPENDS ON A PEACE ACCORD

The United Nations (UN) together with the governments of Sweden and Switzerland which have often led humanitarian issues in the UN system held a high-level pledging conference in Geneva on April 25, 2017 to again draw attention to the deepening humanitarian crisis in war-torn Yemen, currently the largest food security emergency in the world. Some 60% of the population are in a food-insecure situation.

More than 3.5 million people have been displaced in the cycle of escalating violence. “We are witnessing the starving and the crippling of an entire generation. We must act now, to save lives” said Secretary-General Antonio Guterres who presided over the conference. Realistically, he stressed that funding and humanitarian aid alone will not reverse the fortunes of the millions of people impacted. Diplomatically, he called for a cessation of hostilities and a political settlement with talks facilitated by the Special Envoy of the Secretary General, the Mauritanian diplomat Ismail Ould Chekh Ahmed. UN officials and most diplomats are reluctant to call the armed conflict by its real name: “a war of aggression”. The aggression of the Saudi Arabia-led coalition (Bahrain, Egypt, Jordan, Kuwait, Morocco, Qatar, Sudan, and the United Arab Emirates) against Yemen began on March 24, 2015.

The Saudi-led coalition is helped with arms and “intelligence” by the USA and the UK which appreciate Saudi money for arms and do not want to antagonize a large segment of the Arab world when the conflicts of Syria-Iraq-Kurds-Turkey is still “on the table.”

However, the aggression of the Saudi coalition is what has turned an internal Yemen struggle for power between the current and the former President of Yemen into a war with regional implications, now drawing Iran into the picture.

Intellectually, the “political solution” is clear. There needs to be an end to the Saudi bombing and a withdrawal of its coalition troops. Then, the different factions in Yemen can try to develop some sort of inclusive government. The Swiss Foreign Minister, a co-host of the conference, hinted to the issue in suggesting very briefly that, if asked, Switzerland could provide expertise on forms of decentralization and con-federal government. 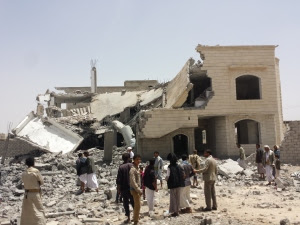 A destroyed house in the south of Sana’a, Yemen.

The effort to create a centralized Yemen government has failed. The future lies in a very decentralized government with great autonomy for the regions, taking into consideration the diverse tribal configuration of the country. With intelligence and patience – always in short supply – a single, highly decentralized State might be developed.

The most difficult first-step is ending Saudi-led aggression, after which an effective humanitarian aid and development program can be put into effect.