The Supreme Court has dismissed a plea by Nupur Sharma for clubbing together all the FIRs against her in different parts of the country. But before rejecting her plea, the court passed strong observations against her. The Court said that ‘she was single-handedly’ responsible for what is happening in the country today. The courts also observed that whatever happened in Udaipur was because of her observation. Justice Suryakant actually asked her to apologise to the country and said that she was the spokesperson of a political party and should have been more restrained.

After the Supreme Court’s observation, suddenly, there is a return of faith in our ‘institutions’. Actually, what can we do except to have ‘faith’ whether we like it or not, Supreme Court is the final authority over anything that happen around us and hence whether we have faith or not, we have to accept its verdict.

However, as I said many times, in the last few years, we have more lectures and lesser judgement which provide us hope for the protection of freedom of expression and human rights. There used to be off the record observations, but now there are open observations, but they do not necessarily form the part of the Court order or judgement, but they create an impression which is difficult to ignore the lower courts which might make a person guilty much before the trial has begun.

Just a few days back, the Supreme Court dismissed Zakia Jaffari’s petition on the Gujarat riots in 2002 when her husband Ehsan Jaffari was brutally burnt to death at the Gulbarga Society in Ahmedabad. Ehsan Jaffari was a freedom fighter, a Congress leader and former Member of Parliament belonging to the Congress party.  She had been pursuing the case and had a right to be heard. There were people who stood with her and supported. Activist Teesta Setalvad stood with the people and was instrumental in getting many of them justice. We don’t know, but possibly she was also helping Zakia Jaffari in filing her petition or providing her legal guidance to fight the case. The court finally found no merit in Zakia Jaffari’s petition and dismissed it. But that was not all, it actually made strong remarks against Teesta Setalvad and two other police officers who were instrumental in helping many of the victims. It was like punishing the petitioner or human rights defender as why they stood with the victims. There is a dangerous precedent here, which is any petitioner who is unable to ‘win’ the case in the Supreme court, might be pulled up for ‘conspiring’ against the state or the prime minister or any leader.

Look at the police response to the two orders of the Supreme Court. Immediately after the Supreme Court delivered its final order in Zakia Jaffari case, STF of Gujarat police arrested activist Teesta Setalvad from her residence in Mumbai. The other noted arrest in the case is Mr R B Sreekumar, former Director General of Police, Gujarat.  Former IPS officer, Sanjeev Bhat is already languishing in jail for years too was named by the apex court in the conspiracy angle to defame the then chief minister Narendra Modi.

Nupur Sharma remains out without any action her as Justice Suryakant had already spoken in the court, getting the VIP treatment, but on the other side, Delhi Police arrested one of the founders of Alt News, Mohammad Zubair, from his Bengaluru residence for posting a tweet in 2018 which according to the police hurt the sentiments of Hindus. The tweet was nothing but clipping of an old film made by Hrishikesh Mukherjee. It is also reported that the anonymous twitter handle, under whose complaint Zubair was arrested actually did not exist and is not available on twitter but the action on the complaint has already taken. At the Delhi High Court, Solicitor General appeared on behalf of the complainant and the date for next hearing was fixed after four weeks. We don’t know whether Zubair will remain in jail or some lower court will give him bail.

Crime against humanity in Udaipur

In the meanwhile, an atrocious terror incident has happened in Udaipur, Rajasthan where two terrorists who happened to be Muslims brutally murdered a tailor named Kanhaiya Lal for his alleged blasphemous Facebook post supporting Nupur Sharma. The incident enraged the entire country, but a timely action by the Rajasthan government helped douse the tempers which were being aggravated as the elections are due in Rajasthan next year hence attempt was made to keep it boiling and get the political mileage. The Hindutva organisations have been blaming Rajasthan government for inaction, but there are certain things which need to be clarified here. That this heinous act of terror was condemned by the Muslims activists, individuals as well as political leaders. The accused were almost immediately arrested by the Rajasthan police. 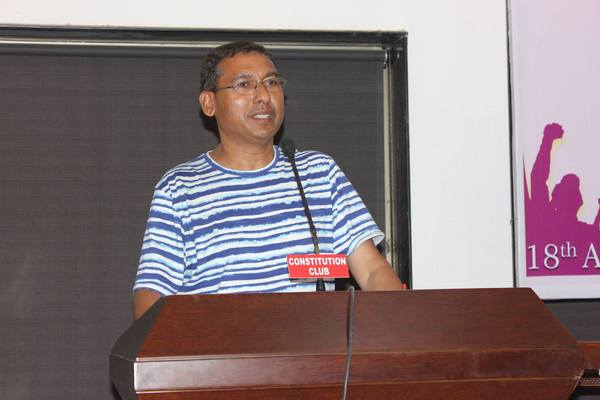 Life of Kalandars in Uttar Pradesh

An Interview with Prof Ram Puniyani