In the year 2005, the alliance of Janta Dal United (JDU) and Bhartiya Janta Party (BJP) formed the state government in Bihar. Nitish Kumar of JDU and Sushil Kumar Modi of BJP became the chief minister and the deputy chief minister/the finance minister. To generate revenues, they introduced a new liquor policy in Bihar, increasing the consumptions of alcohol. The government also fixed the minimum target of monthly marketing for the liquor stores, up to seventy thousand pouches or more of liquor for a village council of ten thousand people the total population. The liquor contractors had to give advance money for the minimum monthly target. Following this system, contractors had to sell liquor pouches and bottles. They started home delivery, and mobile shop systems also began to give alcohol pouches on credits. The government-contract liquor stores were sending their salespeople to villages with on average four liquor pouches or more per households daily in the morning; on an average consumption of four pouches per day per village-household, liquor bottles consumptions extra per village.

*pouch = one polyethene pouch of a half litre alcohol made by spirit/toxin/Ether.

Development:
The luxurious residences, vehicles and other facilities for the ministers and government officers. Comparing to previous days, improved roads and government buildings in urban and semi-urban areas. Blotto ness:
Before the new liquor policy, there were around five to ten persons were drunkards in a village. But because of the new liquor policy, around ninety percent males became addicts, even children of the age of more or less twelve years became alcoholics. Because of availability of liquor pouches on credits in the morning with home delivery, drunkards used to drink alcohol from the morning; "blotto" all the day.

Deaths:
Usually, pouched liquor is made by chemicals as spirit, toxin and Ether. Toxic liquor killed hundreds of people each year in Bihar due to excessive consumption of alcohol. Many people were beaten to death by drunkards and government-liquor-shop contractors for opposing the liquor shops.

Violence on women and children:
Molestations, aggravated-mind activities and sexual assaults with teenage girls and females were the frequent activities in any village. Beating their wives and children, were daily routines of drunk people. Drunkards were snatching the incomes of their wives for alcohol-addiction; they were earning working in agricultural fields and other hard-works. Social disharmony and family discords:
The revenues of the households were not being used for food, clothes, education and living of the families; but being used for drinking alcohol. In each village, almost total incomes of the many households were going to the government-contract liquor shops. People were using the money to pay the debts of liquor stores; they were getting from various government policies as cycles for students, rewards for meritorious girls, financial support for school dress, funding for higher education for talented girls and other.

Peasants were forced to sell their lands to pay the debts of liquor shops. For some earnings for the families, children had no choice other than work as child-labourers. Under the debts of the liquor shops, many teenagers and adults were moving towards crimes, exploitations, selling wives/daughters/kids and other antisocial/illegal activities.

Because of the caste systems, there are millions of people in the Bihar state who traditionally have been eating rats and owned no land or property. These people were spending all money of various government policies in the liquor shops, the result of the new liquor policy. Millions of other households do not own lands and properties but they were spending their hard-earned money in the liquor shops.

In these circumstances and environments, children learn violence, exploitation and become mentally, socially and emotionally distorted, create disharmony deep in the society by generations. A government-contract liquor shop in a village

The Gokul Social University, GSU, does believe in individual's rights to drink and eat whatever an individual wants. But, being a social university, GSU, firmly opposes the uses of the government machinery for making people drunkards just for more revenues. A society where people do not care their wives, their children and social harmony, do not provide opportunities for the next generations to live in peace and harmony. The GSU had started dialogues through meetings, pamphlets and other modes with the people and various organisations after the inception of the government's new liquor policy and was waiting for the opportunity for a greater mass movement. The beginning of the mass movement:
In the year 2012, Manju, a village woman and a resident of a neighbouring village of Gokul Dham (the main campus of the GSU), came to Sanjay Sajjan Singh for the help from the GSU. There was a liquor shop in the neighbourhood of the house of Manju. She and her husband tried to oppose the liquor shop by all possible means because of molestation activities of drunkards, but they were always threatened by the government contractors and officers. Her husband was sent to police custody facing manipulated cases; he was released under the pressure of the GSU.

Sanjay Sajjan Singh wrote letters to the government authorities including the chief minister Nitish Kumar; filed complaints against the liquor shop also tried to raise the issue in front of the higher government authorities. But there was nothing except harassments. After making all these failed efforts, the GSU held an internal meeting of the core team; decided for a local level movement as a test to see the responses of the people's will against the liquor shops.

Manju was motivated for the fast till death in front of the office of the district headquarters. It was summer season, but she started hunger strike sitting on the street under the burning sun of 45-degree Celsius. Manju's hunger strike gained strong supports by the local people and organisations, coordinated by the GSU, and compelled the government authorities within three days to close the liquor shop in the village of Manju.

This victory was the first incident in the Bihar state; a government-contract liquor shop was closed under the pressure of the people. Individuals and organisations from all over the Bihar state were already in touch because of continuous dialogues by the GSU, and this small victory gave the vital-force for a greater mass movement.

The GSU started foot marches, rallies, protests, demonstrations, mass meetings and other mass activities in all over the state. The affected women, children and non-alcoholic individuals started to join the campaign; even the alcoholic addicted individuals who were feeling hopeless because of addiction supported the campaign. The movement was started with a small victory, closing a shop in a village, turned into a significantly large grassroots movement of one million women and the total of two million people of the state.

The total gross cost of the movement including all type of expenses and supports was around 200,000 USD (0.2 million USD). The people supported the each penny, no grant by any philanthropy organisation/individual.

The liquor ban in Bihar, thanks to Nitish Kumar for sincere realisation The liquor movement motivated Nitish Kumar to realise that the new liquor policy was a social disaster for the generations. On the 26th of November 2015, Nitish Kumar, the chief minister of Bihar, announced the liquor ban in Bihar from April in 2016, and he kept his promise by banning liquor in Bihar on the 5th of April 2016. He showed his sincerity for the liquor ban although it was him who incepted the new liquor policy.

Nitish Kumar took a courageous decision; the decision proves his sincerity for the downtrodden upliftments. He made hard rules for liquor ban to overcome the new liquor policy and the social drawbacks of this policy.

Perspective on the liquor ban

Mainly, there are two types of people criticise the liquor ban as an unsuccess or unnecessary. The urban individuals who are addicted to alcohol and they could afford drinking alcohol, and the people with preconceived opinions; criticise and mock the liquor ban with their logical proficiency.

In a degenerated system where people sitting in the various systems are corrupt, feudalistic, insusceptible; do not feel accountable to the ordinary citizens. Instead of being supportive and responsible they discourage and mock the common people's efforts, especially common people's victory on the systems. It is tough to implement social welfare policies indeed on the ground, same applies to the liquor ban implementation.

In the system like this, it is almost impossible to break the nexus of the political leaders, government officials, businesspeople and drunkards, especially a deep-rooted nexus formed in around a decade. Even after the liquor ban, more or less but there will always be the availability of the liquor for the people through illegally. Also, the de-addiction is very tough for an individual who was addicted for more than ten years.

But now the liquor is not available easily in general, as was available in each village before, all liquor-shops have been shut. Also, the consumption is discouraged. Selling and consumption of liquor are banned. For selling or consuming liquor, thousands of people have been sent to the jails.

The liquor ban has been changing the lives of millions of families positively. The crimes like molestations, sexual assaults, domestic violence, violence on children, child labour and other are decreased drastically. The most incredible success of the movement, the ordinary people could change the systems with their leadership. It was the victory of the common people, women and children, the struggle of the village women to live in peace and harmony with self-esteem.

The Gokul Social University, GSU, works for the sustainable economy, peace, social harmony, self-sufficiency, social evolution and system transmutation; founded by Sanjay Sajjan Singh, Vivek Umrao and Sanjeev Narayan Singh in the year 2007; is a non-formal but the community university. The main campus of the GSU is a small campus of three acres with a small building with toilets, a pond, trees, a cow shelter, a cow-dung energy plant, a bore-well driven by renewable energy, a quadrangle for growing vegetables and farmland. Situated at the link road in a rural area of Aurangabad district in Bihar state. The building is also used for a nonformal school for children of poor farmer families of neighbour villages. The GSU uses solar and cow-dung energy for electricity, cooking and other energy requirements on the campus. Farmers and villagers of Aurangabad and its neighbour districts keep visiting the campus. 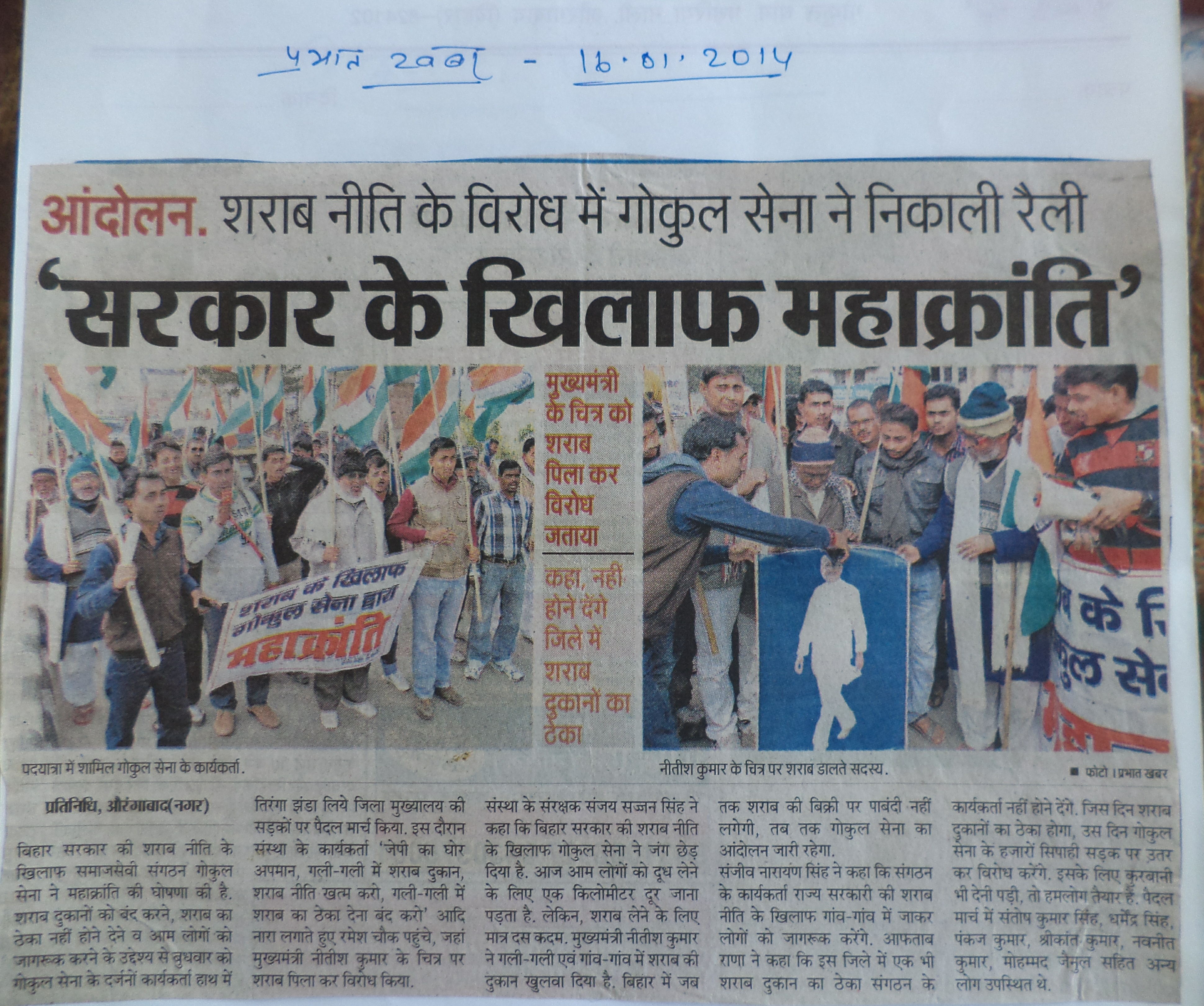 He is an Indian citizen & permanent resident of Australia and a scholar, an author, a social-policy critic, a frequent traveller, a social wayfarer, a social entrepreneur and a journalist.

Nowadays, He is writing a book on the theme of the Constructive Conflict Resolution in the Maoists affected region Bastar Chhattisgarh.