There Will Be No Russophobia Reset 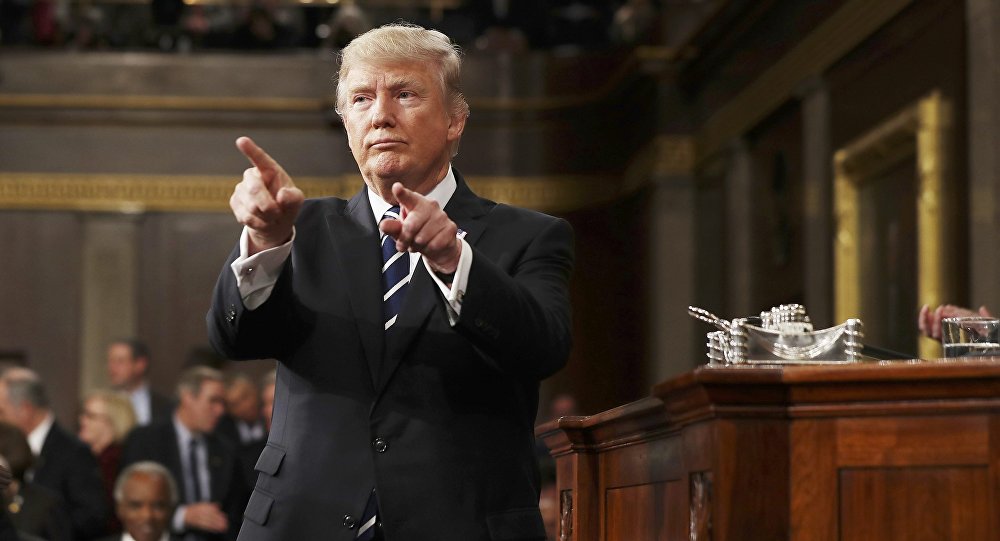 U.S. President Donald Trump reacts after delivering his first address to a joint session of Congress from the floor of the House of Representatives in Washington, U.S., February 28, 2017. (© REUTERS/Jim Lo Scalzo)

(SputnikNews)[themify_quote]In the end, there was hardly a reset; rather a sort of tentative pause on Cold War 2.0. Interminable days of sound and fury were trudging along when President Trump finally decided NATO is “no longer obsolete”; still, he wants to “get along” with Russia.[/themify_quote]

Just ahead of meeting US Secretary of State Rex Tillerson in Moscow, President Vladimir Putin had stressed on Russian TV that trust (between Russia and the US) is “at a workable level, especially in the military dimension, but it hasn’t improved. On the contrary, it has degraded.” Emphasis on a pedestrian “workable,” but most of all “degraded” – as in the National Security Council releasing a report essentially accusing Moscow of spreading fake news.At the apex of the Russia-gate hysteria, even before the extremely the controversial chemical incident in Syria and the subsequent Tomahawk show – arguably a cinematographic show-off — a Trump-conducted reset on Russia was already D.O.A., tomahawked by the Pentagon, Capitol Hill and media-misguided public opinion.

Yet only armchair Dr. Strangeloves would argue it’s in the US national interest to risk a direct hot war against Russia — and Iran — in Syria. Russia has all but won the war in Syria on its own terms; preventing the emergence of an Emirate of Takfiristan.

The notion that Tillerson would be able to issue an ultimatum to Russian Foreign Minister Sergey Lavrov – you’re either with us or with Damascus and Tehran – is laughable. Moscow simply is not going to yield its hard-earned sphere of influence in Southwest Asia to the Trump administration or the US deep state. What Moscow really wanted to know is who’s making Russia policy in Washington. Now they’ve got their answer.And then, there’s the Big Picture. The Iran-Russia strategic partnership is one of the three key nodes, along with China, in the big story of the young 21st century; Eurasia integration, with Russia and Iran closing the energy equation and China as the investment locomotive.

That leads us to the real heart of the matter: the War Party’s fear of Eurasia integration, which inevitably manifests itself as acute Russophobia.

Russophobia is not monolithic or monochord though. There’s room for some informed dissidence – and even civilized inflections.

Exhibit A is Henry Kissinger, who as a Lifetime Trustee recently spoke at the annual meeting of the Trilateral Commission in Washington.The Trilateral Commission, created by the late David Rockefeller in 1974, had its members meticulously selected by Dr. Zbigniew “Grand Chessboard” Brzezinski – whose whole career has been a slight variation on the overarching theme that the US should always prevent the emergence of a “peer competitor” in Eurasia – or, worse still, as today, a Eurasian alliance.

Kissinger is the only geopolitical practitioner that manages to get President Trump’s undivided attention. He had been, so far, the top facilitator of a dialogue — and possible reset — between Washington and Moscow. I have argued this is part of his remixed balance of power, Divide and Rule strategy – which consists in prying away Russia from China with the ultimate aim of derailing Eurasia integration.

Kissinger felt compelled to tell his supposedly well-informed audience that Putin is not a Hitler replica, does not harbor imperial desires, and to describe him as a global super-evil is an “error of perspective and substance.”So Kissinger favors dialogue – even as he insists Moscow cannot defeat Washington militarily. His conditions: Ukraine must remain independent, without entering NATO; Crimea is negotiable. The key problem is Syria: Kissinger is adamant Russia cannot be allowed to become a major player in the Middle East (yet with Moscow backing up Damascus militarily and conducting the Astana peace negotiations, it already is). Implicit in all that is the difficulty of negotiating an overall “package” for Russia.

Now compare Kissinger with Lavrov who, while quoting Dr. K, recently issued a diagnostic that would make him cringe: “The formation of a polycentric international order is an objective process. It is in our common interest to make it more stable and predictable.” Once again, it’s all about Eurasia integration.

Putin was already outlining it, in detail, five years ago, even before the Chinese fully fleshed out the One Belt, One Road (OBOR) concept in 2013. OBOR can certainly be interpreted as an even more ambitious variation of Putin’s idea: “Russia is an inalienable and organic part of Greater Europe and European civilization… That’s why Russia proposes moving towards the creation of a common economic space from the Atlantic to the Pacific Ocean, a community referred to by Russian experts as ‘the Union of Europe’ which will strengthen Russia’s potential in its economic pivot toward the ‘new Asia.'”The West – or, to be more precise, NATO – vetoed Russia. And that, in a flash, precipitated the Russia-China strategic partnership and its myriad subsequent declinations. It’s this symbiosis that led the recent report by the US-China Economic and Security Review Commission to admit China and Russia are experiencing what is arguably their “highest period of bilateral [military] co-operation.”

Exhibit B, on a par with Kissinger stressing that Putin is no Hitler, reveals the theoretically preeminent professional journal of American diplomacy compelled to publish a quite remarkable essay by Robert English from the University of Southern California, and a Ph.D. in politics at Princeton.

Under careful examination, the inevitable conclusion is that Prof. English did something very simple, but unheard of: with “careful scholarship,” he challenged “the prevailing groupthink” and “thrashed the positions” of virtually the whole US foreign policy establishment addicted to Russophobia.The Russia-China strategic partnership – uniting the Pentagon’s avowed top two threats to America — does not come with a formal treaty signed with pomp and circumstance. There’s no way to know the deeper terms Beijing and Moscow have agreed upon behind those innumerable Xi-Putin meetings.

It’s quite possible, as diplomats have let it slip, off the record, there may have been a secret message delivered to NATO to the effect that if one of the strategic members is seriously harassed — be it in Ukraine or in the South China Sea – NATO will have to deal with both. As for the Tomahawk show, it may have been a one-off; the Pentagon did give Moscow a heads up and Tillerson, in Moscow, guaranteed the Trump administration wants to keep all communication channels open.

The War Party though never sleeps. Notoriously disgraced neocons, re-energized by Trump’s Tomahawk-with-chocolates show, are salivating over the “opportunity” of an Iraq Shock and Awe remix on Syria.

The War Party’s cause célèbre is still a war on Iran, and that now conflates with the neoliberalcon’s Russophobia – deployed via the currently “disappeared” but certainly not extinct Russia-gate. Yet Russia-gate’s real dark story, for all the hysterics, is actually about the Orwellian surveillance powers of the US deep state, as stressed by former CIA analyst Ray McGovern and whistleblower Bill Binney.Whatever the practical outcome, in the long run, of the turbulent, two-hour, trilateral Putin-Lavrov-Tillerson meeting, ultimately Russophobia – and its sidekick, Iranophobia – won’t vanish from the US-NATO geopolitical spectrum. Especially now that Trump may have finally shown his real face, a “housebroken dog to neocon dogma.”

The masks, at least, have fallen — and these relentless intimations of Cold War 2.0 should be seen for what they are: the War Party’s primal fear of Eurasia integration.

is a Brazilian independent geopolitical analyst. He is a frequent contributor to websites and radio and TV shows ranging from the US to East Asia. He is the former roving correspondent for Asia Times Online. He has been a foreign correspondent since 1985, and has lived in London, Paris, Milan, Los Angeles, Washington, Bangkok and Hong Kong. Even before 9/11 he specialized in covering the arc from the Middle East to Central and East Asia, with an emphasis on Big Power geopolitics and energy wars. He is the author of “Globalistan” (2007), “Red Zone Blues” (2007), “Obama does Globalistan” (2009) and “Empire of Chaos” (2014), all published by Nimble Books. His latest book is “2030“, also by Nimble Books, out in December 2015.

There Will Be No Russophobia Reset